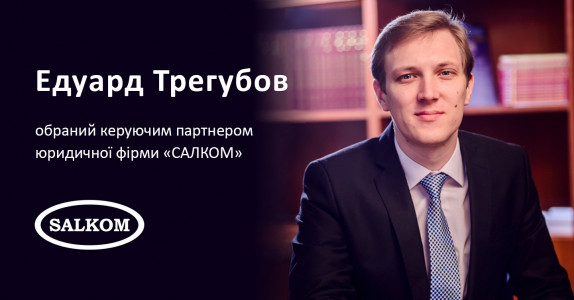 On September 27, Salkom Law Firm announced the election of Eduard Tregubov, PhD, attorney, as a managing partner. Eduard started working as a lawyer of Salkom team in 2010, and in 2017 became a partner. Eduard Tregubov is a specialist in the field of contract and antitrust law; carried out complex legal support of business activities of domestic and foreign companies, consulted in the fields of media and telecommunications.

Yevgen Kubko, President and Senior Partner of Salkom Law Firm, said it was important for the firm to move in the pace of the modern world while maintaining its own culture and values. Valerii Lukomskyy, General Director of Salkom Law Firm, stressed that the election of the managing partner for Salkom will provide synergy of experience and youth and will give a new impulse to the development of the company.

Eduard Tregubov noted that the traditions of the company, that will celebrate its 30th anniversary in the Ukrainian legal market next year, multiplied by high intellectual potential, are a reliable basis for further growth and achievement of the ambitious goals set by the whole team of Salkom Law Firm.